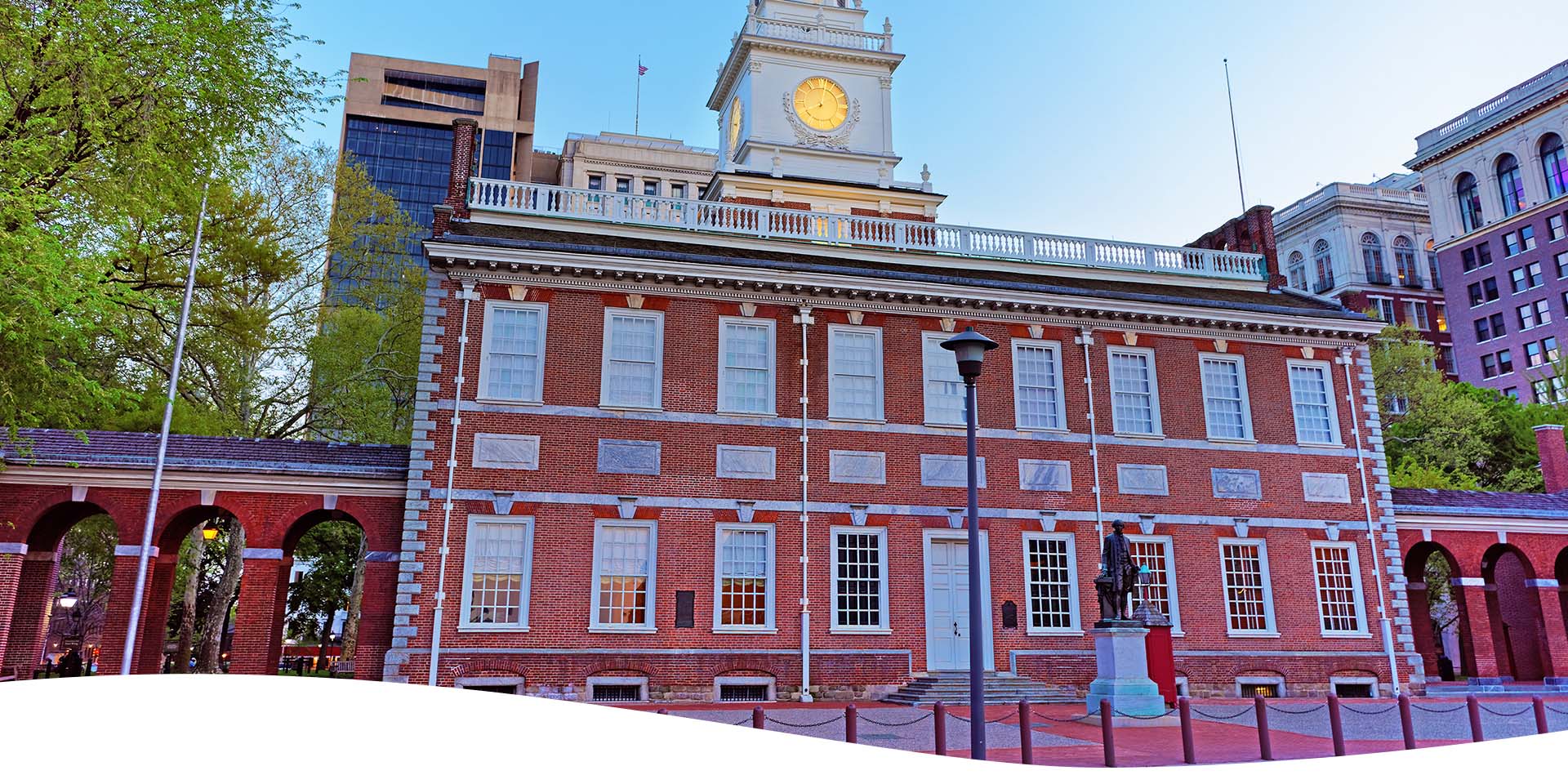 History is all around us, and one of the best ways to engage with that history is to see it in person. If you need some ideas for where to stop on your next American history road trip, we've got you covered. These eight sites are some of the most historically rich places in the United States.

Located on Chestnut Street in Philadelphia, Independence Hall is one of the most iconic historical places to visit in the U.S. It was, in many ways, where our nation started — after months of heated discussions, the Continental Congress signed the Declaration of Independence there on August 2, 1776. The current exhibition is a recreation of the interior as it was during the Revolution, complete with quills and inkwells on the desks.

Independence Hall is open daily from 9 a.m. to 5 p.m. with some holiday closures. You’ll need to purchase a tour ticket in advance to enter the building — visit the official web page for more ticketing information.

And while you’re in the area, why not stop by the Liberty Bell or stroll down Elfreth's Alley? Both sites are just a short walk from Independence Hall.

Want to experience what life was like for the original colonists? You can at the world’s largest living history museum. From art museums to historic taverns to reenactments of colonial-era trades, Colonial Williamsburg’s 301-acre campus in Virginia offers many different opportunities to immerse yourself in early American history.

The English attempted to establish several colonies in North America during the early modern period, but all were unsuccessful until the establishment of the Jamestown settlement in 1607.

There are two great sites you can visit to get a glimpse into the early colonists' lives:

There’s so much to see and learn in D.C. that you might need to add an extra day — or two! We’ve rounded up some of the most interesting historical sites in the city to give you a place to start.

Visit the Capitol building to learn all about the history of the U.S. legislative branch and the building’s amazing architecture. The Capitol is also home to a large collection of American art, so be sure to pay attention as you're walking through.

You’ll need to schedule a tour in advance through the Capitol’s tourism website. Your admission enables you to visit the Visitor Center and includes all tours, programs and activities.

Washington, D.C. presents history buffs with a wealth of museums presenting diverse perspectives. Some of those museums include:

D.C. is also full of beautiful monuments commemorating important figures and dates in American history. Some monuments you need to visit include:

Public parking is often limited in the city, so you’ll want to park your car for the day and travel to each site on foot or by public transportation.

The Battle of Gettysburg — the bloodiest battle of the Civil War — raged from July 1 to July 3, 1863, and ended in an overwhelming Union victory, turning the war in the Union’s favor and marking the Confederacy’s eventual downfall.

Start your visit at the Museum and Visitor Center to learn about the events leading up to and during the Battle of Gettysburg. The museum offers interactive exhibits and immersive experiences to contextualize the battle. Grab a bite to eat at the Visitor Center before heading out into the battlefield.

If you'd like a deeper dive into the key figures and decisions that led to Confederate defeat, you can book a private tour with a licensed battlefield guide. Be sure to visit the Gettysburg National Cemetery, as well, to see where Abraham Lincoln delivered the brief Gettysburg Address on November 19, 1863.

Paul Revere's legendary midnight ride to Lexington is one of the most iconic stories of the American Revolution.

The house, built around 1680, is the oldest building in downtown Boston. It served several different purposes throughout the years and was even slated for demolition before Revere's great-grandson bought the house in 1902. After restoring the exterior to its original appearance, the house became one of the first historic house museums in the country in 1908.

The Paul Revere House is open daily from 10 a.m. to 5:15 p.m. Learn more about the House and purchase tickets on the official website.

Experience country music history and Southern hospitality in Nashville, the capital city of Tennessee. Some great sites for any history buff include the following.

The third best presidential site according to USA Today, Hermitage is the former home of Andrew Jackson, the seventh U.S. president. The house is located just 20 minutes from downtown Nashville, making it a great starting point for a historical tour of the area.

Timed tickets are required to tour the home, but you're free to explore the rest of the grounds at your own pace. Guided historical tours are also available for an additional fee.

As the largest house built in Tennessee during the antebellum period, Belmont Mansion is a sight to see. The Italian-style villa was built from 1849 to 1859 and was home to the Acklen family until the Civil War, when it became a temporary Union headquarters and, later, a women's college and seminary.

Tickets are required for entry to the mansion, and you can explore the grounds at your leisure with general admission. If you'd like a guided tour of the house, you'll need to purchase a timed ticket.

Country music fans will want to make sure they stop by Ryman Auditorium — home to the Grand Ole Opry for more than 30 years — while they're in the city.

Opened in 1892, the Auditorium was originally known as the Union Gospel Tabernacle. Throughout the decades, the Auditorium hosted religious services as well as concerts and lectures from notable historical figures like Booker T. Washington. Now, it's a prominent country music venue.

Catch a show or tour the grounds for a taste of Nashville's music history.

You can easily reach each battlefield landmark by car or by foot. There are two visitor centers:

The Best Routes to Take on an American History Road Trip

Ready to hit the road but not sure where to start? Here are a few route ideas for exploring specific eras of American history.

The Revolutionary War transformed the 13 original British colonies into a unified, independent nation. This route will take you through some of the key moments of the Revolution and provide some time for sightseeing along the way.

You'll start in Boston, Massachusetts, one of the most important cities during the Revolutionary War. The city is full of historical sites, so be sure to budget enough time to hit them all. Some great suggestions include:

Your next destination — Minute Man National Historical Park. Here, you can tour the Lexington and Concord battlefields, where the first battles of the Revolution took place in April of 1775. The park runs special historical programs and events throughout the year, so be sure to check the website before you head out.

Keep moving south toward New York City and take some time to explore the Big Apple's history. Notable sites include:

You'll end your trip in Philadelphia, the original capital of the United States and the meeting place for the Continental Congress. Walk around the Historic District to hit key sites like Independence Hall and the Betsy Ross House.

Most Civil War battles took place south of the Mason-Dixon line, so that's where you should start if you want to take a road trip through this era in American history.

Start your journey where the first real battle of the war took place — Manassas National Battlefield Park in Manassas, Virginia. Spend the day touring the battlefield, then head northwest to Harpers Ferry National Historical Park in West Virginia to see where abolitionist John Brown and his compatriots raided the federal armory in 1859. While the raid was subdued fairly quickly, it was an important event in the lead-up to the war.

Keep driving north to visit Antietam National Battlefield in Maryland, the site of the single bloodiest day in American history. Take some time to walk through the battlefield, then get ready to head north again.

Your final stop on this trip is Gettysburg National Military Park in southern Pennsylvania. Make the most of your time there by spending the day on the battlefield and embarking on a ghost tour or catching a show in the evening.

After news broke that gold had been discovered in California in 1848, thousands of Americans rushed westward in the hopes of making their own fortunes. Follow their tracks to learn all about one of the most formative eras of American history.

Begin in Nevada City, then travel south to visit Empire Mine State Historic Park, one of the state's oldest gold mines. Keep moving south to see Sutter's Mill in Coloma, where James Marshall found the first gold nuggets in 1848. Be sure to stop by the Interactive Gold Discovery Museum while you're there to learn all about it.

Next, you'll head to Sacramento, the capital city of California. Take some time to tour the city — the Sacramento History Museum is a great stop for any historic road trip in this area. If you've got some extra time, you can also walk through Sutter's Fort State Historic Park, where you can learn about the complex interactions between the settlers and the Californian Native Americans.

You'll end your trip in Jamestown, California, where you can get your hands dirty panning for your own gold at Railtown 1897 State Historic Park.

You've got some ideas of where to stop. Now it's time to get planning. If you need a vehicle to get you there, we can help. Take your historical tour of America in comfort and convenience with an RV! Learn more and find out more information on RV financing. Apply for an RV loan online today!

What Is a Class C RV?

Learn More About Our RV Loans